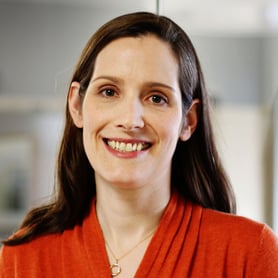 Plenty of ink has been spilled on the topic of corporate values. They are ubiquitous: They show up on the walls of the office, in the company handbook, and in PowerPoint slides. The one place they may not actually show up is in the culture.

I’ll admit that I used to be a bit of a skeptic when it came to pithy statements about how a company should act. I think it’s vitally important to express your values in a common language, but the efforts to socialize and adhere to them often fall flat. When they’re no more than words on a wall, they actually undermine the culture they seek to foster.

Now that I love (and strive to live by) the Nordic maxims, I often ask myself: what makes company value statements successful, and what’s going on when they don’t work?

Here are a few thoughts on why corporate value statements don’t resonate and what you can do to make sure they do.

Why they don’t work

They don’t represent the real values of an organization.

The real values of an organization aren’t just in the company handbook, but in the words and actions of employees. When there’s a disconnect between how your organization describes itself and how people operate, then they don’t mean anything, no matter how wonderful they sound.

In my opinion, values should be both aspirational and attainable. They should be aspirational to give your employees something to aim for beyond the day-to-day expectations of their job. For example, one of Nordic’s maxims is “assume the best intentions.” It means that you should try to think the best of people, even when they’re doing something that seems intended to hurt or annoy you. It’s easy to say and hard to practice, which is why it’s so important.

That said, company values shouldn’t be so aspirational that they feel completely unrealistic. We should feel that on a perfect day, we could accomplish all of them, but that they serve as a good reminder on all the other days when we could be better. 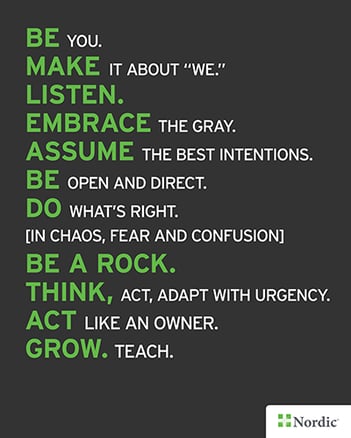 No one ever talks about them.

Once you have your list of values, you need to make sure they’re embedded in the culture. That means doing more than bringing them up in meetings or putting them on the wall in the lobby. It means using them as a practical tool for hiring, coaching, performance evaluation, and self-improvement. You should also refer to them when you introduce the culture to clients and candidates, and you should hire and partner with people who appear to live your values as well.

My favorite thing about Nordic’s maxims is that they serve as a shorthand for the way we want to treat each other. If I remind a teammate to “be open and direct,” they know exactly what I mean and have already bought into the idea that openness is important. In many of my one-on-one meetings, I bring up a maxim that the person should be working to master – or mention a maxim I’ve struggled to live out and share some lessons learned.

Writing down your values is the easy part. Making sure people live by them is much harder. Nothing will invalidate your culture faster than employees thinking, “If we really believe in these statements, why do we employ people who clearly ignore and abuse them?”

Be brave enough to elevate the people who live your values and part ways with the people who don’t, even when the latter are people who bring in revenue and deliver results. When your employees see that you reward people who embody your culture, they’ll respect the leadership and be more likely to emulate that behavior. And of course, your leaders should be the first to model these behaviors, starting with the CEO.

How to make sure they work

Start with what’s already true … and what you want to be true.

When articulating your core values, look at what qualities are on display when your organization is at its best. And then ask yourself: what do we want to be as an organization today, tomorrow, and 10 years from now? What do we need to focus on to ensure that we maintain that identity, regardless of how our circumstances may change in the future?

At Nordic, we noticed that we were different from other companies in the way we gave direct feedback, adapted to new situations, and embraced learning. We knew that in order to stay true to our identity as an organization, we needed to emphasize collaboration, ownership, and the highest ethical standards (as well as our five other maxims). While none of us lives out every maxim every day, starting with the truth about our culture and reflecting on what we wanted to be known for in the future made the maxims easy to share and enforce.

Put them in context.

Your maxims should be grounded in real-life examples so that they feel actionable and concrete to your employees.

One of our maxims is, “In chaos, fear, and confusion, be a rock.” I can vividly recall a time when a project was crashing and burning around me, and it was my responsibility to maintain a calm and level head, even though I was anxious on the inside. If you can’t quickly think of an anecdote to explain your maxims, you’ll probably find that they feel meaningless or buzzwordy to your employees.

Your maxims are not an initiative to be executed upon one year and retired the next. Once solidified, your maxims should be at the core of everything you do, and even employees who left five years ago should recognize them as a consistent part of the culture. Think of it like this: Living your values should be as automatic as breathing. You do it when things are great, when you’re healthy, and you’re even more aware of the effort it takes when you’re not feeling so good.

One of the biggest mistakes you can make is switching to a new set of values when you start to fear the current ones aren’t resonating. Work hard to create a culture to reflect your values, rather than changing or forgetting them every time you feel a shift in the culture. It sounds obvious, but it is very, very hard to do. Success requires constant effort, reflection, and humility on the part of every employee.

No company can say that every employee lives out their values every day. But when you and your employees truly believe in the culture you’ve set forth, it creates a powerful contract within your teams about how you will treat each other. It allows you to challenge and push each other without fearing that your trust will be broken, because you’re starting from a foundation of shared meaning.

If you have ideas for making values stick, please reach out. We would love to hear from you.